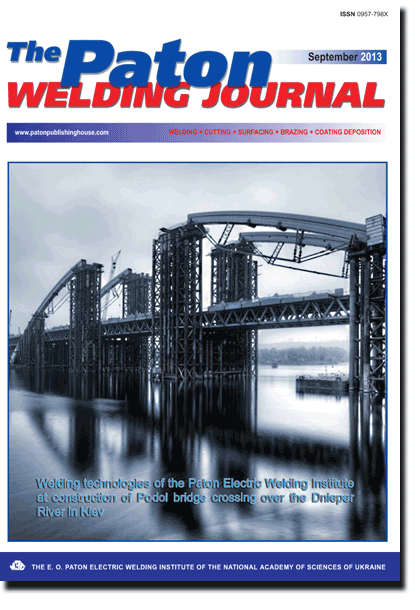 
Abstract
The investigations of defects of structure of rail joints, made by flash-butt welding, were carried out. The defects were detected at the fracture surface of joints during static bending tests and also after fracture under the operation conditions. The analysis of microstructure and chemical heterogeneity of the fracture surface was performed using Auger-microprobe JAMP 9500F of the JEOL company (Japan). The defects formed as a result of deviation from the standard welding conditions include lacks of penetration and inclusions of iron-manganese silicates which considerably decrease the values at mechanical tests of welded joints. Their presence in the welded joints is not admissible. Clusters of inclusions of aluminium silicates, the so-called dead spots, and oxide films of the more complicated composition are formed in the joint on the basis of non-uniformly distributed non-metallic inclusions of rail metal. The dead spots of small area do not influence the values at mechanical tests of welded joints. Their total area on the fracture should not exceed 15 mm2. On the basis of carried out investigations the criteria of quality evaluation of the high-strength steel joints, made by flash-butt welding using modern control systems, were determined. 9 Ref., 2 Tables, 11 Figures.

View/Download PDF of this article, the file size (Kbytes):733
Pricing information for subscription