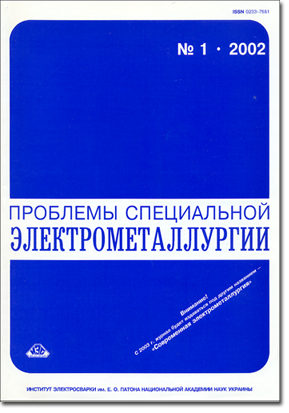 ELECTROSLAG TECHNOLOGY
Paton B.E., Medovar L.B. and Saenko V.Ya. Improvement of efficiency in ESR metal production. P. 2
The state-of-the-art of ESR metal production is analyzed and prospects for the development of electroslag technologies and equipment, which are based on the electroslag process, are considered. Assortment of ingots, billets and semi-finished products is offered whose production can be realized effectively in the industrial conditions after modification (or reconstruction) of the electroslag equipment and implementation of new electroslag technologies.
Ryabtsev A.D., Troyansky A.A., Pashinsky V.V., Samborsky M.V. and Carter W.T. Application of electroslag technology for refining titanium and titanium alloys from nitrogen-rich inclusions. P. 8
The feasibility of use of a chamber electroslag remelting for refining titanium alloys from nitrogen-rich inclusions was checked experimentally. It was established that the application of CaF2-Ca flux system makes it possible to create the necessary thermodynamic conditions for decomposition of nitrogen-rich inclusions during the process of a chamber electroslag melting.
ELECTRON BEAM PROCESSES
Shpak P.A., Grechanyuk V.G. and Osokin V.A. Effect of electron beam remelting on structure and properties of high-speed steel R6M5. P. 12
Results of examination of physical-mechanical properties, microstructure, chemical and phase compositions of high-speed steel R6M5, produced by electron beam remelting of industrial waste, are given. The decrease in chemical inhomogeneity, high dispersity and uniformity of distributed carbide phase in the produced EBR ingots are outlined. The life of a tool manufactured from the steel examined 1.1-1.4 times exceeds the life of a tool from high-speed steel (forgings) of
Mogilnikova T.T., Nerodenko L.M. and Movchan B.A. Amplitude dependence and microscopic elasticity limit of the Ni-63 % Co material deposited from the vapor phase. P. 15
The amplitude dependence of internal friction was investigated, and the microscopic elasticity limit of composite condensates Ni-63 % Co produced by electron beam evaporation and subsequent condensation in vacuum was determined. The role of the mechanism of microplastic deformation in formation of high damping ability of the material under investigation was evaluated.
PLASMA-ARC TECHNOLOGY
Shapovalov V.A. Heat model of plasma-arc process of growing tungsten single crystals. P. 17
Heat model of plasma-arc process of growing rods of tungsten single crystals is presented. Results of numerical solution of heat conductivity equation are given. It is shown that with increase in single crystal height the power is increased while the pool parameters are not almost changed. It was established that the heat power is stabilized at the single crystal height equal to its three diameters.
Demchishin A.V., Kurapov Yu.A., Michenko V.A., Kostin E.G. and Ternovoj E.G. Cylindrical cathode-arc plasma sources for vacuum evaporation. P. 21
Problem of coating long and large-sized products in mechanical engineering necessitated development of extended plasma sources. Examples of the developed long cylindrical pulsed evaporators, their advantage and drawbacks are considered. A new long cylindrical cathode-arc plasma source with a continuous adjustable mode of arcing is proposed and its design features are described. Modifications of evaporators with a cathode length of 500 and 1550 mm are tested.
VACUUM-ARC REMELTING
Lisienko V.G., Nasyjrov Ya.A., Klimov M.I., Altman P.S., Tashkinov A.Yu. and Goncharov A.E. Specifics of distribution of arc voltage and frequency of droplet short-circuits during vacuum-arc remelting of titanium alloys. P. 24
The Verkhnyaya Salda Metallurgical Works conducted an experiment under industrial conditions on vacuum-arc remelting of 515 mm diameter electrode into 670 mm diameter titanium alloy ingot. Distribution of arc voltage drop and droplet short-circuiting frequency depending on the arc current, interelectrode spacing and pressure were investigated. Statistical models were constructed allowing the principle of such dependencies to be established. The models showed a clear correlation in distribution of arc voltage drops and the droplet short-circuiting frequency with variations in the interelectrode spacing. A model is suggested on the basis of which it is possible to monitor and control the melting process.
VACUUM-INDUCTION MELTING
Tarasevich N.I., Dubodelov V.I., Goryuk M.S. and Rybitsky A.I. Mathematical simulation of the modes of cast iron heating and soaking in a magnetodynamic holding furnace. P. 28
Investigation results are given on thermal modes of operation of a magnetodynamic holding furnace for heating and pouring of cast iron. A mathematical model of the process under investigation was developed. Integrated computational experiment and full-scale tests in operating equipment were conducted. Factors, determining occurrence of thermal processes in the furnace, were established. Process parameters were established, allowing optimisation of the conditions of heating and holding the cast iron in a magnetodynamic holding furnace.
GENERAL PROBLEMS OF METALLURGY
Grigorenko G.M., Pomarin Yu.M., Lakomsky V.V. and Orlovsky V.Yu. About behaviour of nitrogen in gas-slag-metal system. P. 31
Analysis of behaviour of nitrogen in the gas-slag-metal ternary system was made on the basis of review of literature data. Interrelation of nitrogen solubility and transport in slags with their structure is considered. It has been established that metal can be nitrided directly from the gas phase through oxide-fluoride slags.
Gasik M.I. and Grigorovich K.V. Identification of types of oxide inclusions in steel 110G13L by fractional gas analysis evalograms. P. 33
The content of oxygen combined into different types of non-metallic inclusions in commercially melted steel 110G13L samples was evaluated by the method of fractional gas analysis using the ingenious software OxSeP and the LECO gas analyser TS-436. It has been confirmed that the oxygen content of inclusions and their types depend upon the residual content of a deoxidising element (aluminium) in steel.


(You are viewing the simplified file contents)

Sorry, the PDF of this issue is not yet available
Pricing information for subscription