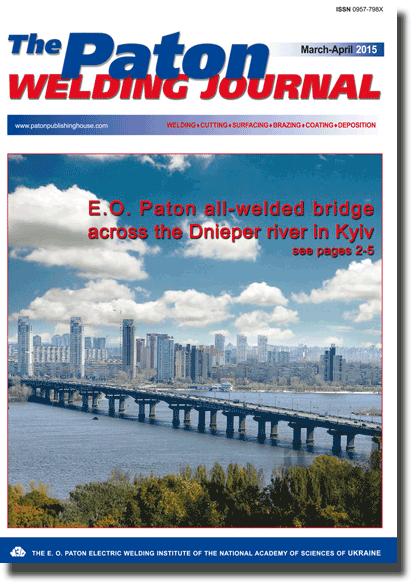 
Abstract
Self-consistent mathematical model was proposed for the processes of energy-, mass- and charge transfer in the plasma of the column and anode region of electric arc with refractory cathode, running in inert gas, and exposed to a focused beam of CO2-laser radiation, propagating along the arc column. Mathematical description of the processes running in such a system uses single-temperature model of arc plasma, allowing for additional plasma heating due to laser radiation absorption, as well as its multicomponent nature, associated with metal evaporation from cathode surface. Influence of laser beam power and anode surface temperature on thermal and electromagnetic characteristics of plasma of the column and anode region of argon arc on refractory cathode was analyzed. It is shown that as a result of additional local heating of arc plasma by laser radiation, its temperature in the paraxial zone of arc column can rise by 5000-10000K, compared to the respective arc in TIG welding. This leads to an essential restructuring of spatial distributions of electric potential and density of electric current in the arc column near-anode region, as well as density of thermal flow applied by the arc to the anode, thus changing the distributed and integral characteristics of its thermal and dynamic impact on the metal being welded. It is established that the impact of a focused laser beam on arc plasma leads to the effect of electric current contraction in the center of the region of anode binding of the arc and respective increase of the density of heat flow, applied by the arc to the anode, in hybrid (CO2-laser + TIG) welding. This promotes an increase of the energy applied to the metal, which is consumed in its melting and, therefore, an increase of penetrability of laser-arc heat source. It is shown that anode metal evaporation leads to a certain weakening of the effect of electric current contraction in the arc near-anode region, which is exposed to a focused laser beam. The influence of laser radiation absorption and refraction in arc plasma on the characteristics of laser beam interacting with it and its thermal impact on the surface of metal being welded under the conditions of hybrid (CO2-laser+ TIG) welding was studied. It is shown that laser beam absorption in arc plasma leads to a certain decrease of radiation power, reaching the anode surface. The size of beam focusing spot on the above surface practically does not change, i.e. beam refraction in arc plasma turns out to be insignificant. 11 Ref., 1 Table, 14 Figures.

View/Download PDF of this article, the file size (Kbytes):591
Pricing information for subscription