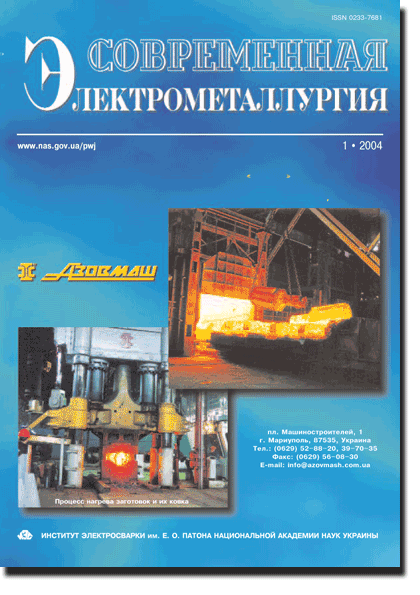 ELECTROSLAG TECHNOLOGY
Paton B.E., Chepurnoj A.D., Saenko V.Ya., Medovar L.B. and Litvinenko A.V. Prospects of application of electroslag technologies in production of high-pressure vessels. P. 2
Main results of experimental-industrial works on the creation of ESR-based technology of manufacture of cast-welded high-pressure vessels, long thick-walled tubes and hollow ingots including those of hard-to-deform heat-resistant and corrosion-resistant steels and alloys have been summarized. A special attention is paid to the problem of manufacture of a branch pipe zone of bodies of high-pressure vessels. Different technological variants for the solution of this problem are considered. Many developments have found industrial application at Mariupol Heavy Machine-Building Works. Prospects of application of electroslag technology using molten metal in the production of high pressure vessels and other critical products are described.
ELECTRON BEAM PROCESSES
Trigub N.P., Zhuk G.V. and Akhonin S.V. Electron beam melting of heat-resistant alloys using an intermediate crucible. P. 9
Using the methods of mathematical modelling, the thermophysical peculiarities of crystallization of heat-resistant nickel alloy ingots in electron beam melting with a portion pouring of molten metal from an intermediate crucible into a mould are studied. The optimum melting conditions were established allowing producing the quality ingots with a uniform fine-grain structure without shrinkage defects. It is shown that the technology offered provides the high chemical homogeneity of ingots and lower liquation of alloying elements as compared with the method of a vacuum-arc remelting.
Mogilnikova T.T., Nerodenko L.M. and Movchan B.A. Microscopic limit of elasticity of three-layer material of Fe-Cu system deposited from vapour phase. P. 15
Microscopic limit of elasticity of a three-layer composite material, produced by electron beam evaporation and subsequent condensation in vacuum, was determined by a method of internal friction. Dependence of a microscopic limit of elasticity on alternation of layers was studied. It was established that condensates Fe/Cu/Fe and Fe/Cu are characterized by the presence of two microscopic limits of elasticity. Assumption was made about interrelation between microscopic limits of elasticity and a structure of each layer.
Shalamberidze O.P., Khakhanashvili K.G., Lomaya T.P. and Demchishin A.V. Substructural peculiarities of electron beam vacuum condensates of refractory oxides. P. 17
Using experimental data about the phase composition of vacuum condensates Al2O3, ZrO2 and Y2O3 of up to 50 mm thickness, deposited at different temperatures of the substrate, the possible reasons of stabilizing high-temperature modifications of examined oxides at room temperature are considered and a mechanism of their formation depending on the rate of evaporation and temperature of condensation is suggested.
GENERAL PROBLEMS OF METALLURGY
Grigorenko G.M., Pomarin Yu.M., Lakomsky V.V. and Orlovsky V.Yu. Specifics of mechanism of nitrogen absorption by high-reaction metals. P. 20
On the basis of earlier conducted investigations of kinetics of nitrogen interaction with liquid high-reaction metal, a mechanism of this process has been suggested which differs from a mechanism of nitrogen interaction with metals of iron triad. It is shown that the limiting stage of the process of nitrogen absorption by high-reaction metals is a chemical-adsorption link.
Rudoj A.P., Zhuchenko L.P., Melnik V.Kh. and Portnov A.P. Effect of copper on properties of high-purity chromium and its alloys containing lanthanum. P. 24
Ingots of high-purity chromium and alloys on its base, containing copper and lanthanum, were melted by induction and arc methods in furnaces with copper crucibles and moulds. Hardness and transition temperature of these alloys were investigated. It is shown that the hardness of chromium alloys at 0.15 wt.% Cu content is reduced to 115 MPa, and the transition temperature is decreased to zero. In chromium alloys with 0.25 wt.% Cu and addition of lanthanum the hardness is reduced to 100 MPa, and the transition temperature at 0.15 wt.% Cu is decreased to -20 oC.
ELECTROMETALLURGY OF STEEL AND FERROALLOYS
Gasik M.I. Hadfield steel: State-of-the-art of technology and materials science of railway switch frogs. P. 27
Results of fundamental and applied studies in the scope of materials science problem of increasing the quality of steel 110G13L (Hadfield steel) to produce all-cast frogs and cores of switches of main and branch railway tracks are generalized.
Sojfer V.M. Certification of AC and DC arc steel melting furnaces. P. 37
The article shows an experience in certification of arc steel melting furnaces of leading manufacturers and gives names, types and parametric ranges of the furnaces. Types and procedures of certification tests are presented, peculiarities of manufacture and control of water-cooled elements are outlined, problems of evaluation of conformity of furnace designs to the safety requirements of standards and problems of analysis of production state-of-the-art are described. The article shows also results of evaluation of progress in new technical solutions on such arc furnaces as shaft furnaces, furnaces-ladles, DC furnaces.
ENERGY AND RESOURCE SAVING
Bykovets V.V., Lakomsky V.I. and Kirilenko V.P. Specific electric resistance of lumpy thermoanthracite in thin layer. P. 44
Results of measurement of specific electric resistance of crushed thermoanthracite of three fractional compositions used in electric calcinators are presented. The measurements were made in coal thin layers. For the first time, the values of radius of a given a-spot of electric contact between the coal grains under the conditions of absence of external pressure on the coal layer were calculated.


(You are viewing the simplified file contents)

View/Download PDF of this issue, the file size (Kbytes): 9408
Pricing information for subscription