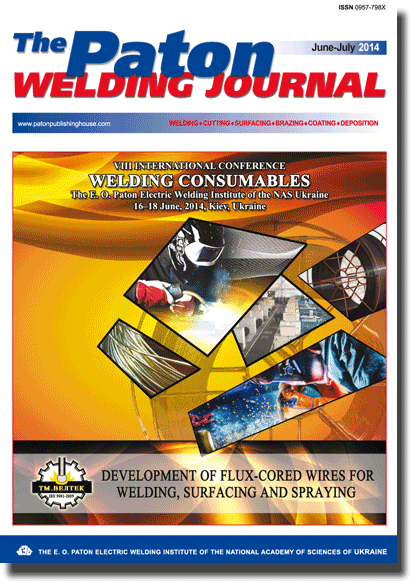 
Abstract
Discrete filler is the most promising filler material for electroslag surfacing in current-conducting mould. Particles of different dispersity can be used as such filler, namely shot, tablets, chips, powders, shorts, granules, etc. At correct selection of particle size and mass velocity of their feeding into the slag pool, a modified fine-grained structure of deposited metal with improved mechanical and other service properties can be formed. This is confirmed by positive results of surfacing the forming rolls of different mills, in particular mill 2000. The most wide-spread surfacing consumable is filler in the form of steel and cast iron shot. Shot can be mainly produced by three technological methods: mechanical fragmentation of liquid metal jet, dispersion by centrifugal forces, and dispersion by energy carrier flows. The latter method is the most wide-spread, in particular, at application of air as dispersing agent. During dispersion and further formation and cooling of pellets they are saturated with oxygen, nitrogen and hydrogen. Oxygen saturation depends on shot material, its dimensions and production method. In order to apply shot of a wider granulometric composition, fine shot as well as coarse (after fragmentation) shot can be formed into tablets by powder metallurgy. The process of their melting in the slag is similar to melting of regular-sized 0.8-2.5mm shot. Chips of alloyed steels and alloys are a special kind of discrete filler. The main requirement to such filler is limitation of its dimensions and shape and absence of lubricoolant in it, contributing to a change of deposited metal composition, particularly by carbon. Other fillers, in particular, in the form of wastes from various productions (slurry wastes, wastes generated at ingot dressing, tool treatment, etc.) do not provide stable quality of deposited metal, but can be applied in development of resources-saving surfacing technologies. 4 Ref., 3 Tables, 9 Figures.

View/Download PDF of this article, the file size (Kbytes):663
Pricing information for subscription